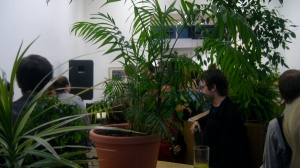 Rain couldn’t stop play last night as the Edinburgh Art Festival (EAF) officially launched with a decidedly damp street party in the heart of the capital. Among the beer, burgers, ice cream vans and a rather wonderful reincarnation of Karen Carpenter; the great, the good and the nicht so gut, of the Edinburgh art scene took turn in shaking off their umbrellas in the doorways of the Collective, Stills and Fruitmarket Galleries before re-deploying them for the journey through Advocates Close.

Now in its 5th year the festival offers another ambitious programme of more than 130 contemporary visual art exhibitions and events throughout the cities museums, galleries and temporary spaces. This years festival features established artists including Tracy Emin and Richard Hamilton as well as emerging talents from around the world.

Throughout the coming month contemporaryartetc… will bring you news and views from the festival. We would also welcome your contributions written or visual. If you would like to submit images or text please send them to:

you can also leave comments on any of our posts.