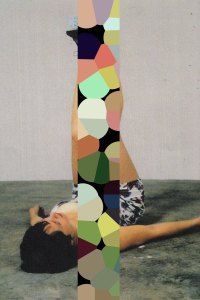 AIRetc Lauren McLaughlin is currently running a series of workshop looking at the history and development of collage in contemporary art practice since its early beginning in Cubism, Dada through Surrealism and Pop to the work of current artist. In her latest posting on the AIRetc blog Lauren discusses the workshops and presents some of the work she has shared with the CAP1 students.

According to its proponents, dada was not art — it was “anti-art“. Dada sought to fight art with art. For everything that art stood for, Dada was to represent the opposite. Where art was concerned with aesthetics, Dada ignored aesthetics. If art were to have at least an implicit or latent message, Dada strove to have no meaning — interpretation of Dada is dependent entirely on the viewer. If art is to appeal to sensibilities, Dada is to offend.

The term Neo-Dada is associated with the work of artists Robert Rauschenberg and Jasper Johns. The term was first applied, in an un-attributed comment, in a 1958 issue of the American magazine Artnews .

The term refers to two aspects of the early 20th Century Dada movement. Firstly there was the connection through the use of ‘found’ objects and junk to create combines – which are hybrid painting – sculptures – which can be seen in the work of Rauschenberg and Schwitters and secondly there is the Dada-like sense of paradox and ambiguity which can be seen in the paintings of Jasper John with his use of numbers, maps, targets that fill the canvas.

Neo-Dada provided a bridge between abstract expressionism and pop art.

Modern Art is a general term used for most of the artistic production from the late 19th century until approximately the 1970s. (Recent art production is more often called Contemporary art or Postmodern art). Modern art refers to the then new approach to art where it was no longer important to represent a subject realistically — the invention of photography had made this function of art obsolete. Instead, artists started experimenting with new ways of seeing, with fresh ideas about the nature, materials and functions of art, often moving further toward abstraction.