Congratulations to Edinburgh College CAP Alumni Jenny Souter on the film she made in partnership with the Guardian, Screen Education Edinburgh (formely Video in Pilton) and the people of North Edinburgh.

Jenny’s connection to the area dates back to 2010 when she started studying at Edinburgh College’s Granton Campus. During her final year on CAP Jenny participated in “Local” a project we developed with the North Edinburgh History Group and North Edinburgh Arts Centre. The project began with meetings between our CAP 2 artist and the members of the history group who showed films, shared stories about the social history and activism of North Edinburgh and gave the students a guided tour of the area. In response the students made a range of creative responses which you can see in the post below from 2012.

The project came about through a chance encounter with legendary North Edinburgh activist Willie Black and a conversation about my own connections with North Edinburgh through my Granny Holligan and Uncle Charlie who remianed in the area until the start of the redevelopment in 2008/9. Willie played a key role in the entire project and it is great to see him feature in this new film.

Jenny’s response to the project 10yrs ago was aslo a very successful moving image work titled “Sysiphus” , below, which was developed in reaponse to archive footage of local women featured about the seemingly futile battle with the damp in their houses.

It is wonderful to see that 10yrs later Jenny has returned to the community and made this fantastic new film. We cant wait to see whats next!

HND Contemporary Art Practice graduates Lauren Wilson and Aimee McCallum have beaten off strong competition form across the country to  spend a month living and working in Venice at the worlds largest and most prestigious  contemporary art expo the Venice Biennale.

The pair who first met here at Edinburgh College while studying on the foundation course went on to join us on CAPetc… Graduating in summer 2017 they then took up their guaranteed places on the BAhons Fine Art course at the University of Cumbria as part of our articulation agreement.

Although they are currently working hard on their respective degree shows, both are looking forward to spending the month of July immersing themselves in this fantastic opportunity.

Find out more about what Aimee and Lauren will be doing and how they and their current lecturers feel about their achievement by clicking the link:

Yesterday was our first screen print workshop in some time. It has been a while but the new bigger space means we can get our screens and squeegees out again. Thanks to print supremo Kirstie Burn for all her expert help. We will post up some of the results soon!

Looking forward to block printing with Jennie on Wednesday! 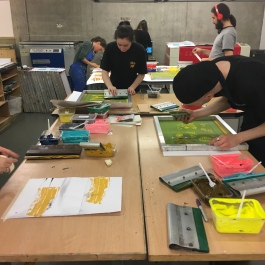 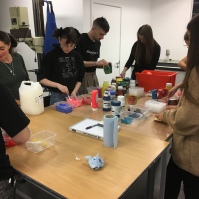 An exhibition that brings together 20 Scottish-based artists including 12 former and current, Edinburgh College HND Contemporary Art Practice graduates, artist and residence and staff,  of different disciplines and backgrounds to collaborate in the creation of ten “Hawf ‘n’ Hawf” football scarfs. This project curated by artist Lewis Bissett, invites artists to revisit the medium used in his piece “K.W.A.M (ken wit a mean?)” from his solo show “BOAIS ANE”. Those involved were encouraged to represent their own artistic identity and practice, while considering the concept of football scarfs. It’s a pal’s act, ken wit a mean?

The Art Team at Edinburgh College Granton are delighted to announce our call for applications for our 2017-18 Artist in Residence (AIRetc) programme.

We are looking for 2 artists to contribute to one of the countries most successful and dynamic Art Departments. Now in its 7th year the Artist in Residence programme (AIRetc…) is an innovative scheme which provides recently graduated / professional artists who have previously studied a fine / contemporary art course at Edinburgh College Granton (formerly Edinburgh’s Telford College) with the opportunity to develop their knowledge, skills and experience in Art education while developing their creative practice in a dedicated studio space.

If you would like to be considered for the residencies please download the information below and the application form.